FLIGHT is out now!!

The fifth book in my science fiction romance series, The Naravan Chronicles, is out now!

FLIGHT is available in ebook everywhere and the paperback edition will follow soon. The idea for this book was sparked almost twenty years ago, not long after the first book in the series, PROMISE was published and my editor told me Raf needed his own story. It's taken me the better part of that twenty years to get the book written and released, but I'm really proud to finally have it available (for the first time! Yay! Happy Dance!! *grin*)

I hope you'll enjoy my space pirate's adventure as much as I enjoyed writing about it! 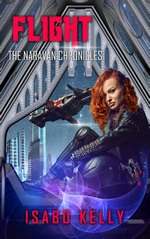 Clare O'Malley needs the help of notorious space pirate Raf Tygran, but falling for someone like Raf is a guaranteed disaster for someone like her, and she can’t afford the distraction. Raf knows Clare is a liar the minute they meet. He loves liars, and the delectable Clare is a liar he wants to know better. Can two adventure junkies find a future together without starting a galactic war?

For more news about my upcoming releases as well as the occasional free short story, you can join my newsletter.