Book 2 in the Naravan Chronicles series, INTERFACE, is officially OUT NOW! This is a shorter story, originally published in DREAM QUEST edited by Linnea Sinclair and JC Wilder. And now it's back as a stand alone.


When Gina’s nanotech research leads to murder and death threats, her father hires private mercenaries to protect her. Alex has a rule. No romantic relationships with clients. That rule goes out the airlock when he meets Gina. But protecting her means ignoring his feelings and hers, and Alex isn’t good at ignoring things…

Next up in the series, SECRET (Book 3), which will be out May 11, 2018 (I just finished setting up the pre-order!). SECRET was originally published as THE SECRET OF NARAVA, so if you've already bought that book, you're good. This version hasn't been substantially changed.

Like the other re-releases, SECRET will be specially priced at only $0.99 for the pre-order and the
first week of release. If you're working your way through the series on the lead up to the new release in the fall, this is the time to buy the book!

A little nice review news: PROMISE (The Naravan Chronicles 1) got a lovely review from the Red Headed Book Lovers blog. She really enjoyed my little twist on the idea of an invasion story, which was cool *grin*. 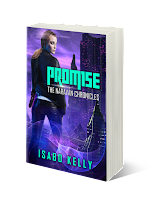 In addition to the review, PROMISE is now officially out in print! You can find the PRINT EDITIONS here: Amazon | B&N | Book Depository (for free international shipping). You should also be able to special order the book from most bookstores.

I'm heading over to set up the INTERFACE print edition now, so look out for that soon. And don't forget, if you'd like to keep up to date on my re-releases, new releases, and some general fun stuff I have planned down the line, please join my newsletter. I promise I don't clutter your inbox!